Script is a higher-level programming language, which is part of the report. Script can be written in one of the following .Net languages:

A script is applicable in many places. Using the script, you can do the following:

In order to control the report with maximum flexibility, every report object has got several events. For example, in a handler, connected to the Data band, you can filter records, that is, hide or show the band depending on certain conditions.

Let us consider the events which are fired during the report generation process. As an example, we will take a simple report, containing one page, one Data band and two Text objects on the band:

Further, printing of the “Data” band row starts. This happens in the following way:

Printing of the band row occurs as long as there is data in the source. After this, the formation of the report in our case ends. The FinishPage event of a page is fired and finally - the FinishReport event of the Report object.

So, by using events of different objects, you can control every step of report formation. The key to correct use of events - full understanding of the band printing process, expound in the eleven steps above. So, a lot of operations can be done, by using only the BeforePrint band - any change, done to the object, will also be displayed. But in this event, it is not possible to analyze, on which page will the band be printed, if it stretches, because the height of the band will be calculated on step 6. This can be done with the help of the AfterLayout event in step 7 or AfterPrint in step 10, but in the latter case, the band is already printed and operations with objects do not give out anything. In one word, you must clearly state, at what moment each event is fired and use, those, which correspond with the given task.

For referring to report objects (for example, Text object) use the name of the object. The following example returns the height of Text1 object:

Note that report’s native unit of measurement is screen pixels. Keep it in mind when using such object’s properties like Left, Top, Width, and Height. To convert pixels into centimeters and back, use the constants, defined in the Units class:

Apart from objects, which are contained in the report, there are two variables defined in the script: Report and Engine.

The Report variable refers to the current report. In the list below, a list of the report object’s methods is given:

On the figure below, you can see the meaning of some properties listed above. 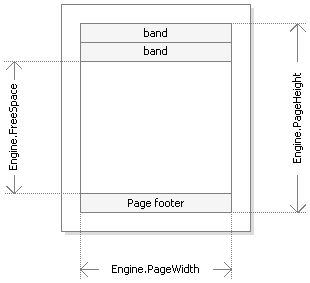 Engine.FreeSpace property determines the height of the free space on the page. If there is the “Page footer” band on the page, its height is considered when calculating the FreeSpace. Note that, after printing a band, free space is reduced.

How does the formation of a prepared report page take place? FastReport engine displays bands on the page until there is enough space for band output. When there is no free space, the “Report footer” band is printed and a new empty page is formed. Displaying a band starts from the current position, which is determined by the X and Y coordinates. This position is retuned by the Engine.CurX and Engine.CurY properties. After printing a band, CurY automatically increases by the height of the printed band. After forming a new page, the position of the CurY is set to 0. The position of the CurX changes when printing a multicolumn report.

Engine.CurX and Engine.CurY properties are accessible not only for reading, but also for writing. This means that you can shift a band manually by using one of the suitable events. Examples of using these properties can be seen in the “Examples” section.

When working with properties, which return the size or position, remember that, these properties are measured in the screen pixels.

In the Engine object, the following methods are defined:

By using the AddOutline, OutlineRoot, OutlineUp methods, you can form the report outline manually. Usually, this is done automatically with the help of the OutlineExpression property, which every band and report page have got.

For controlling the current element, there are OutlineUp and OutlineRoot methods. The first method moves the pointer to the element, located on a higher level. So, the script

will create the following outline:

The OutlineRoot method moves the current element to the root of the outline. For example, the following script:

will create the following outline:

For working with bookmarks, the AddBookmark and GetBookmarkPage methods of the Engine object are used. Usually bookmarks are added automatically when using the Bookmark property, which all objects of the report have got.

The GetBookmarkPage method returns the page number on which the bookmark is placed. This method is often used when creating the table of contents, for displaying page numbers. In this case, the report must have a double pass.

Contrary to the FastReport expressions (covered in the “Expressions” section), never use square brackets in script for referring to the data sources. Instead of this, use the GetColumnValue method of the Report object, which returns the value of the column:

For referring to the data source itself, use the GetDataSource method of the Report object:

Help on properties and methods of the DataSourceBase class can be received from the FastReport.Net Class Reference help system. As a rule, this object is used in the script in the following way:

For reference to system variables, use the GetVariableValue method of the Report object:

For reference to the total value, use the GetTotalValue method of the Report object:

Reference to the total value can be done at that time when, it is being processed. Usually the total is “ready to use” at the moment of printing the band, on which it is located in the report.

For referring to report parameters, use the GetParameterValue method of the Report object:

Parameters have got a definite data type. It is given in the DataType property of the parameter. You must take this into account when referring to parameters.

For changing the value of the parameter, use the SetParameterValue method of the report object: